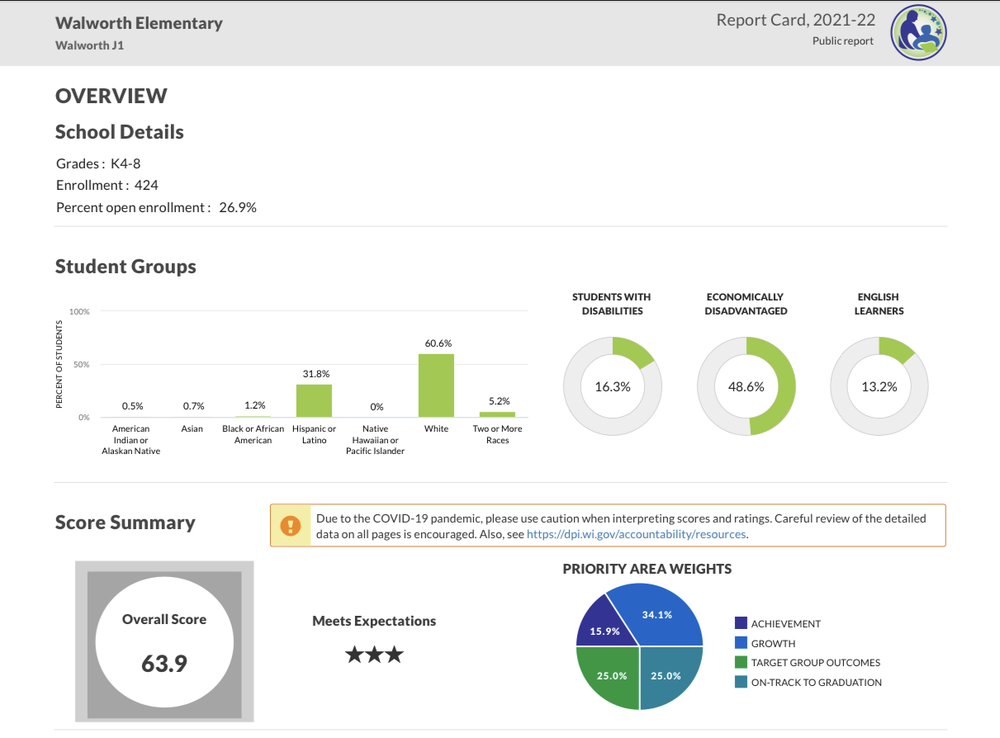 The complete report cards are now live and can be found on DPI's Web site.

"(The) positive news (is) our score improved from the previous year," said Caitlin Dowden, school principal, about the category Meets Expectations. "However, the goal is to continue to improve."

Walworth received 64.1 in Growth with English LA at 71.7, above the state average of 66.0, while math was at 56.5 compared to 66.0 in the state. On-track to graduation, Walworth scored 83.2, narrowly above the state in school-wide attendance, but slightly higher in chronic absenteeism and lower in third-grade English LA and eighth-grade math.

Dowden said she is hoping the two new curriculums and the use of iReady will help. She also cited "small groups, differentiation and our early intervention approach."

Grades 4K through eighth had an enrollment of 424 with 26.9 percent open enrollment for the 2021-22 school year. The two highest "school groups" were 60.6 percent white and 31.8 percent Hispanic or Latino. Two or more races made up 5.2 percent, while no other group was higher than 1.2 percent. Students with disabilities accounted for 16.3 percent, while economically disadvantaged were 48.6 percent. English learners made up 13.2 percent.

"(We want to) make sure to continue to: 1) Have HIGH expectations for all students; 2) Teach/create dependable habits; (and) 3) Use time efficiently," said Dowden.