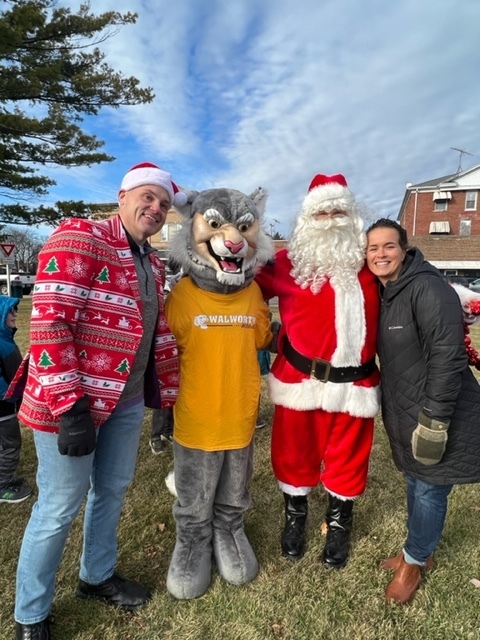 The three first-grade classes at Walworth Jt. School District #1 had a very jolly afternoon on Dec. 1, watching the tree-lighting ceremony at the village square and meeting Santa Claus. They also toured the village police and fire stations, as well as going to the village hall to make decorations, receive treats and have photos taken with Santa.

"I took a break from making presents," declared Santa upon his arrival. Wesley Wildcat pushed the switch to turn on the lights throughout the square.  Of course, the flights were much more visible at night than in the daytime.

Students took turns by their classes at the three other locations as part of the walking tour.

Capt. Joaquin I. Alonzo read books like Suzy Goose and the Christmas Star, and Santa Duck, to the students, who also received a treat. Firefighter and AEMT Molly Forstrom with Walworth Fire/Rescue spoke to the students and told them a tanker truck held 2,000 gallons of water, to which one student reacted with, "What the heck!" The students also saw a demonstration of how a firefighter uses a camera while crawling through a smoke-filled room to search for people who may be caught inside a burning, smoke-filled building.

Upon seeing Santa at the village hall, one girl expressed her excitement by saying, "I can't even stop saying 'Ho, ho, ho' when I see Santa."

The decorations the students made were put on the tree at the village hall. Each student received another stocking, provided by the church, from Santa as each posed for photos with him. Treats were also sent back to school with the teachers for any students who were absent that day.